People, Planet and Prosperity (PPP): The Sustainability Lie of the Pyramids

Recently the Rio20+ conference has ended and it dealt with all aspects of sustainability. How can we live in a sustainable way on earth. The word sustainability has been a while in our vocabulary and it means we like to live in such a way on earth we do not harm the environment we live in but support and sustain our environment to make sure our relationship with earth, nature and ourselves is a healthy kind were we do not deplete our reserves.
As one may notice, there is no room for the term “making money and get rich” in this concept. So a new kind of terminology has been introduced to make up for this: “People, Planet, Profit”, later to be changed into “People, Planet, Prosperity”, suggesting there is a balance were all three can benefit. Or in simple layman words: “get rich and save the planet with us on it in the same time”. PPP is a popular expression as it gives all the excuses needed for a government, a commercial organization or a human being to continue focusing on money while still believing it is possible to be in harmony with the environment or in other words: be sustainable.

This is a lie, and I shall show you why.

and locate at one point each of the following items “People, Planet and Prosperity”. In the heart of the triangle is the exact point (= red) located where all three items are in full equilibrium: People = Planet = Prosperity. This equilibrium is the only place where PPP is in full balance. All other locations in this triangle mean PPP is off balance or in simple words: not sustainable. In fact the only stable locations are alongside one of the three sides of the triangle and each stable location is a mix of two out of three items, never three out of three. Possible stable combinations are People – Planet; Planet – Prosperity; People – Prosperity. It is easier to understand when we do the following: 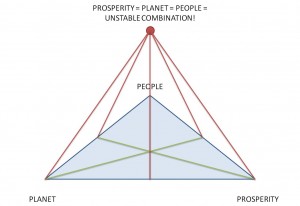 and lift the red dot and a pyramid appears. It is obvious the red dot (the equilibrium) will slide downwards until it rests on the outer side of the base of the pyramid. During sliding the size of the pyramid created gets smaller and smaller until it disappears totally and a stable position is created.

What does it mean?

It means when striving for Prosperity (what we all in general do) is only viable in the combination People and Prosperity, leaving the Planet OUT of the equation or Prosperity and Planet leaving People OUT of the equation. This is the dilemma we face today: get rich quick and destroy earth or have a prosperous earth without any human intervention.

Do not fixate on People and Prosperity but accept the whole system oscillates (or vibrates). This means a stable system can only be created when we are all willing to accept a natural evolution of the relationship between the three P’s without forcing one of the P’s into existence. Accept what is possible without looking for artificial means of increasing Prosperity or People, accept the possibilities this planet (earth!) we live on within the natural limits. And last but not least, accept that the system (PPP) is always limited by earth and overstepping her boundaries means creating an unsustainable environment where according to the PPP pyramid, may not be a place left for us – humans.
So forget our fixation on prosperity (or profit as it was called in the early days) but start working on our relationship with the planet (People – Planet): this is the ONLY sustainable solution where there is room for our future.